I don't know why I have paid so little attention to this blog over the last 14 weeks. Certainly life has been a whirlwind - bringing Jack into the world - taking Jack home after 4 days in the hospital - having breastfeeding go terribly, terribly wrong - ending up in Children's Hospital with Jack when he was 16 days old because he could not gain back the pound he lost after leaving the hospital - going BACK home with Jack - pumping intead of breastfeeding round the clock - quitting pumping 100 times .. but never really giving it up - finally getting an answer as to why my breasts were in such bad shape (after surviving weeks of open sores .. mastitis .. thrush .. and continued pain - we realized I was allergic to the famous All Purpose Nipple Ointment touted by breastfeeding expert Dr. Jack Newman. It's great stuff! If you're not totally allergic..) - OK where was I - trying to get into a rhythm with my baby - worrying that I wasn't "doing it right", whatever "it" is - getting so very little sleep (still haven't made tons of progress there - but we're making a little!) - discovering that Jack was a "hot" baby who was sweating big spots through his night clothes and swaddles - freaking out about the sweating and worrying SO MUCH that it was an indicator of SIDS - feeling fearful and anxious all the time that he could be lost to me (I can't even type out what I'm being euphemistic about here) - trying to maintain some kind of relationship with J (and usually failing miserably - we are best friends but in many ways very disconnected right now) - ignoring housekeeping and hating how messy my house is - finding that my relationship with my dogs has TOTALLY changed even though I swore I'd never be that type of person (who has a baby and then doesn't care about her dog(s) - it's not that I don't care - but I don't care as much, I hate to admit it) - wading through what feels like neverending drama and sadness with my family (when will we get a break? Maybe Jack's our happy break, I don't know)...

I guess THAT'S where the last 14 weeks have gone. But I could have been writing about it - should have been writing about it. Oh - not to mention I'm back at work now - and taking a 20 percent pay cut shortly having decided I CAN NOT work full-time anymore - so I am going down to 4 days a week and hoping it's not a ridiculously bad decision as in this economy - layoffs are always looming both at my company and at J's. But I can't be away from Jack 5 days a week. Truly - 4 days a week is too many as well - 3 would be more palatable - but we can't afford 3 right now. 4 is a stretch actually but I made one of my "leap and the net will appear" decisions and am just going for it. Screw it. It will have to work out. It's only money, right?

God it feels good to write about this stuff. REALLY good. I am such an idiot. This is such a good place for me put it all into words - all of my "stuff" and fears and failures and triumphs and total idiocy and smashing brilliance - and I've been, I don't know, noodling around on other websites .. lost in baby blues .. just totally distracted I guess. But I think I am back.

I love being a mom. I love my son. But I have definitely battled some blues. It was a long, dark winter - and I was very isolated. I didn't feel comfortable taking Jack out - for reasons including his immature immune system ... the possibility of a baby meltdown in public ... the difficulty of just getting ready and getting out of the house (what used to take 15 minutes now takes 45..) ... and also as an "Exclusive Pumper" (I'll blog about that next time perhaps) - I am tied to my pump every 4 hours. It really, really limits my ability to do outings of any length .. and it also has contributed to my wasting a lot of time on the internet (not here - but on other sites that require nothing but mindless participation - or non-participation.) I find much of the work that goes along with new mommy hood to be draining - the bottles (washing, sterilizing) - laundry - pumping ... and when I have a free moment - I don't spend it very wisely. I'm realizing this today because a good friend has just "quit" one of the sites I waste a lot of time on. Her doing so has really made me look at how I've been spending time on-line too. I don't think blogging here is a waste of time - quite the opposite. I need to be doing this - especially as I am hoping to get back into writing - freelance writing - something I used to do and used to make a little money doing! But I keep putting off a lot of what I think I'd like to be doing or should be doing - and my life doesn't change (well, except for the whole I HAVE A BABY thing.) But the whole I have a baby thing is a factor here .. recently I was especially struck by the fact that I was ill prepared to deal with having to make money, while being a mom. As my maternity leave came to an end recently - I felt like a failure. Like I hadn't planned correctly - hadn't realized I'd really have to go back to work. It was a day I had dreaded since long before I ever got pregnant - and I'd had so much time to figure out a better plan - and had not.

So I need to figure one out now. Going part-time - down to 4 days a week - is a step in the right direction. Now, I need to figure out how to only work 3 days a week - without making any less money. And how to really "own" my life - rather than selling myself - short - to others. And doing work that truly, I find boring. And that requires me to spend far too much time away from home.

Big blog entry about my breastfeeding comeuppance - and my decision to exclusively pump (and supplement with GASP formula - something I equated with poison before I was forced to come down off my high horse and feed it to my child) - next time.

It feels good to blog again! Even if just for myself, for now...

And here's a few pics for anyone who hasn't totally and completely abandoned this blog... 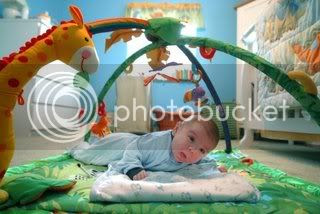 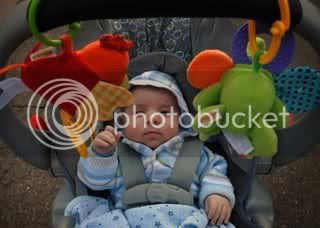 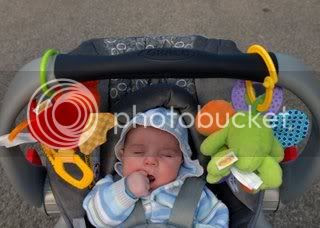 I love the pics!!!! I love the fist in mouth syndrome :) and I love your nursery!!! I wantt o see more pics!! great color blue, we have the same dresser (in black) and love the crib!

Glad to see you are blogging again! Love to see what Jack is up to!

What a beautiful Jack!

I am so glad you are back! I have pictures of the twins on facebook. Are you a facebook member? Jack is so cute! The twins were born November 19, 2008 at 33.5 weeks.